At the start of the pandemic, towns and cities across the globe scrambled to adapt to the new realities of COVID-19. Full street closures, partial closures, pop-up street seating for restaurants, and sidewalk extensions soon became part of the COVID urban street scape, allowing space for people to physically distance while being active and accessing essential destinations. Slow streets are designed to discourage cut-through traffic through strategic signage and barricades. Thousands of cities have implemented slow streets, such as New York, which plans to eventually expand the program to over 100 miles of streets; Athens, Greece; Bogota, Colombia; and Oakland, California, with 21 miles of slow streets spread throughout the city.

Now, thanks to the efforts of neighborhood groups, advocacy orgs, and city and county staff, slow streets are beginning to roll out across Santa Cruz County. The City of Santa Cruz recently launched 11 neighborhood slow streets, and both Watsonville and the unincorporated county have an application open for residents to apply to have a slow street installed in their neighborhood.

In early September, residents discovered Santa Cruz’s slow streets spread throughout the Westside, Eastside, and downtown areas of the city. “When we launched the application process early in the summer, we received an application from almost every neighborhood in the city, 48 in total” says Claire Gallogly, transportation planner for the City of Santa Cruz. “We looked for streets equitably spread across the city that would create safe walking and biking routes via low traffic corridors to and from common neighborhood destinations and ended up selecting these 11.” These streets range in length from 500-foot-long Jenne, between Blackburn and Chestnut, to Escalona, between Bay and Highland, at just under a mile.

The Escalona neighborhood played a particularly vital role in bringing slow streets to Santa Cruz. “We’re the longest street without bike lanes and sidewalks in the city,” says Escalona neighbor Greg Larson. “We started Escalona Greenway long before slow streets to advocate for bicycle and pedestrian improvements for our neighborhood.” After hearing about others advocating for Slow Streets locally, Greg and 22 other “block captains” from Escalona launched a petition on Change.org calling for the City to implement 12 slow streets by Memorial Day. Within two weeks the petition had 1600 signatures, and near unanimous support across the political spectrum.

When the City launched the slow streets application process, Escalona Greenway was unsurprisingly the first group to apply. “People are being respectful, almost everybody is driving slower,” says Greg when asked about what neighbors have noticed since slow streets launched earlier this month. “That just makes it safer for everyone when there’s no sidewalks or bike lanes.” Greg says he has noticed other benefits as well; “It’s slowed down my driving, not just on my block, but wherever I drive now in town.”

Residents in many other parts of Santa Cruz County can now request slow streets for their neighborhoods: Bike Santa Cruz County is managing applications for the unincorporated county, and the City of Watsonville has recently opened their slow streets request process. To apply for a street in the unincorporated county (Live Oak, Soquel, Aptos, etc), head to bikesantacruzcounty.org/slowstreets. For Watsonville slow streets inquiries, head to the City’s Neighborhood Traffic Plan toolkit and reach out to appropriate staff. While there are not currently plans to expand the Santa Cruz program, the city still welcomes neighborhoods to apply, and would love to hear your feedback about the program via the survey at the bottom of their application page. 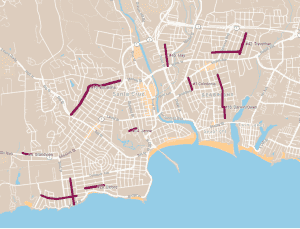