It was Saturday night, August 15. I was biking along Westcliff Drive with my dog Mara in the trailer and my friend Brendan nearby when a wall of lightning lit up over Monterey Bay. We had never seen anything like it. Silent, frequent bolts of lightning illuminated an ominous blue and purple night sky. Had we just ridden onto the set of Terminator 5? As we rode and watched in awe, we didn’t know that the lightning would be making land fall within those ensuing hours and ignite an unprecedented number of simultaneous fires all over northern California, including right in our home county.

Within just a few short days, several individual fires merged to form the CZU Lightning Complex fire, which would go on to burn for over a month and consume 86,509 acres of the Santa Cruz Mountains. Thousands of local residents were evacuated, including 25 Ecology Action staff. Several friends and family of Ecology Action lost their homes. As we experience record breaking heat waves, mega wildfires, and a blanket of toxic smoke over California, we are faced with overwhelming evidence that climate change is making conditions worse. This most recent fire brought this all right to our front door.

In other fires that have swept California’s dry landscape in recent years, like the 2018 Camp Fire in Paradise, traffic jams from emergency evacuations left people stuck on the road with flames engulfing roadways and catching cars that couldn’t flee fast enough. One of the questions that emerges is “is our local infrastructure sufficient to evacuate an entire town all at once?”

While the fire was being fought on the front lines the consistent message ahead of evacuation orders and warnings was “have a plan to get out and be ready at a moment’s notice”. Reminders for having a go bag and the six P’s of emergency evacuation were circulated widely. For some, it was a firestorm that swept through like the community of Last Chance Rd. And parts of Bonny Doon. For other parts of the mountains the fire progression was slower, and allowed people to consider what to take with them. Fire dynamics can change quickly, however, so it’s good to have a plan.

Back in July during Bike Month, which feels like a year ago, we hosted a community screening of MOTHERLOAD which captured the unique way cargo bikes can offer utility for many scenarios in life, from kid hauling to disaster relief. One of the vignettes in the film showed an event that the director of the film, Liz Canning, helped organize in Mill Valley – the Disaster Relief Trials. 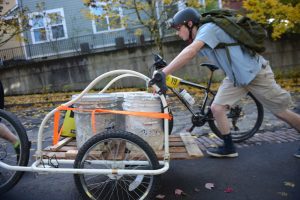 Disaster Relief Trials “is a dramatic visual statement arguing for the relevance of cargo bikes to the resilience movement. In peace time and disaster time, cargo bikes work.” Organizers of these events ask some provoking questions about disaster scenarios. “How can we reduce the future suffering and death created by fuel shortages, clogged and damaged roads, electricity outages, water and food scarcity, over taxed first responders, and communication system failures?” Their suggestion? Invest in resilience.

“Cargo bikes are light, small, and inexpensive yet highly capable of hauling big loads with relative ease. They operate efficiently without any power or sophisticated transportation infrastructure. They not only transport relief goods, but also people and messages. These disaster response-compatible qualities need to be proven in dramatic style over and over again before we can permanently erode the “bikes are toys” paradigm. Once we achieve “toys and tools”, we can start to make practical steps to incorporate cargo bikes into municipal disaster plans.” 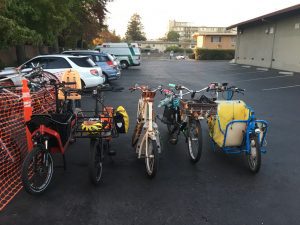 A close example that helps illustrate where this application could work is UCSC. During the CZU fire, UCSC had to evacuate nearly 2000 people from UCSC main campus. In non-COVID times, the campus population could be closer to 20,000 people on a given day. As a UCSC alumni, I used the bus and my bike extensively over my four years there. Invariably, I was able to get off campus much quicker by bike than I could by taking a bus. To effectively evacuate a campus like that, it would be worth considering having hundreds, if not thousands, of bicycles ready to enable people to descend and efficiently evacuate campus in combination with other modes. With the added context of COVID-19, it would also address physical distance needs that would be hard to achieve on buses.

While we recover and reflect as a community in the aftermath of the CZU Fire and we face the next potential threat of mudslides this winter, thinking about the potential application of bicycles in a disaster response could be a helpful tool to consider.