As the global community (a very disjointed one) made some headway with the Glasgow Climate Pact to avert the worst impacts of climate change, here in the Monterey Bay, a healthy, sustainable, and fun mode of transportation recently received a big boost. In the last two months, three new local e-bike rebate programs have been launched. This confluence of funds will help address the high cost of e-bikes – a major barrier to ownership for many consumers. The public entities driving down the cost are the City of Santa Cruz, the Monterey Bay Air Resource District, and Central Coast Community Energy, all with a focus on equity. There are different criteria for participation in these programs. For example, the program from the City of Santa Cruz is solely for workers in the downtown Santa Cruz parking district. Fortunately, all three entities encourage stacking the rebates where applicable to help reduce the price further, which could mean as much as $2,400 toward an e-bike for low-income individuals.

E-bikes are gaining popularity, as they allow riders to go further and faster with less effort than a regular bike. They climb hills with ease; ask anyone who e-bikes to the UCSC campus. E-bikes can replace most around-town car trips, saving money on fuel, maintenance, and parking while zipping by traffic. E-bikes are gaining popularity globally and particularly in the U.S., where sales of e-bikes grew by a whopping 240% over the last 12 months (according to the market research firm NPD Group). To spur that growth, many European countries are offering financial incentives; at home, several Northern Californian public agencies are subsidizing the cost of e-bikes.

Ecology Action has been advocating and working behind the scenes to reduce the upfront cost of e-bike ownership because we view e-bikes (as do countless others) as a game changer to get more people biking overall and get everyone biking more often. E-bikes can really move the needle for transportation trips. From 2000-2007, Ecology Action operated a successful Santa Cruz County e-bike incentive program, with over 1,600 locals buying discounted e-bikes. The e-bike market has evolved and matured by leaps and bounds since that time, with higher quality and more durable e-bikes available in a range of bike types (road, mountain, folding, cargo, etc.) and a range of costs. Complete e-bikes (non-conversion kits) range in price from about $1,000 up to $6,000 plus. The price depends on quality, battery size, motor type, specialty features like power meters, and frame type. Prices also vary based on the business model, whether the e-bike is direct-to-consumer or sold through a bike dealer. Specialty bikes like electric cargo bikes can be more expensive, but they have incredible utility in carrying kids, a week’s worth of groceries, and lots more.

To make this much-improved generation of e-bikes available to all income levels, Ecology Action solicited funding support from private donors, foundations, and national bike organizations. We raised money from several individual donors as well as People for Bikes, the RiverStyx Foundation, and Kaiser Permanente, which we used to help nudge the City of Santa Cruz to fund and incorporate the Go Santa Cruz E-Bike Rebate Pilot Program into their robust downtown Go Santa Cruz sustainable transportation program. The Go Santa Cruz Downtown program was launched in 2018 to reduce solo commute trips for downtown workers. With this pilot funding, Ecology Action and the City of Santa Cruz built a program to invest in e-bikes for downtown workers. Our team spent the summer of 2021 building an online rebate processing system that gives participants and bike shop employees a seamless experience and allows us to track program enrollment and transportation behavior change.

The Go Santa Cruz e-bike incentive is a point-of-purchase voucher, so the consumer avoids having to pay full price upfront and receiving reimbursement later for the rebate amount. Local participating bike shops are reimbursed by Ecology Action. This pilot is limited to those who work in downtown Santa Cruz, with voucher amounts of $400 for income-qualified individuals and $200 for non-income-qualified individuals. This pilot has enough funds for 100 rebates; at the time of writing, 45 applicants have been approved since the program started on October 26. The vouchers are only redeemable at participating local bike shops – many of which are offering additional discounts.

The Go Santa Cruz pilot has the narrowest geographic reach, while the two other programs cover everywhere from the Monterey Bay to the Central Coast. These three programs can be combined to offer substantial savings and better access to e-bike mobility. Each program has different criteria, but local consumers can get the best discount by buying a new e-bike at a local bike shop. Depending on income and work location, local consumers can save from $800 (no income qualification) to as much as $2,500 (income-qualified)! The Monterey Bay Air Resource District has the most stringent low-income qualification, at $29,172 or less annually for a single earner. Central Coast Community Energy is $51,520 or less annually for a single earner. To qualify for the Go Santa Cruz e-bike rebate, individuals must be actively enrolled in a low-income assistance program (e.g., PGE Cares, CalFresh, Medicaid, WIC, Calworks, etc.).

There are several differences between the programs, such as that some allow online purchases, while others don’t. Some are based on low income only. All of the programs cover only new e-bikes, but these can be any class (1,2, or 3). Here are the links for each program. Read each program’s criteria carefully before buying an e-bike. Here is a high-level comparison of the three programs below: Go Santa Cruz, Central Coast Community Energy (CCCE), Monterey Bay Air Resource District. 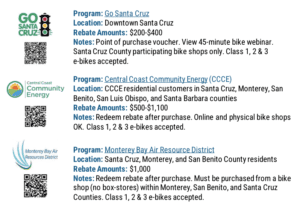