Our world has been turned upside down in so many ways that we don’t even notice some of the changes that are happening. As we adapt to the impact of COVID, which has forced the economy into a self-induced coma—compounded by devastating wildfires, deadly police brutality, systemic racism and inequality, and a nerve-wracking presidential election—it’s easy to miss the subtler changes that are taking place around us, especially in local transportation.

As most of us have been doing our best to shelter in place, many working from home and going to meetings via Zoom, transportation has morphed. As we move to varying restrictions (depending on the COVID infection graph trajectory) in our shelter-in-place ordinances, there have been sporadic increases in travel—but with fewer sustainable transportation options. Santa Cruz METRO bus ridership is at about 25% capacity due to health concerns. There is also a reduction in carpooling. Biking, on the other hand, is experiencing a boom, as it is a physical distancing-compliant activity that more people are utilizing for family time, stress relief, exercise, and fresh air. Inside exercise has moved outdoors, and local bike shops have never been so busy. As the demand for bikes has increased, the supply has dwindled from a perfect storm of supply chain disruptions and historic demand. To make things harder, as folks wait months for bikes, our local e-bike-share system, JUMP, also ended in March—a casualty of COVID and corporate budget slashing.

These brightly colored shared e-bikes arrived in Santa Cruz in June 2018 and were instantly popular for commuters, college students, visitors, grocery shoppers, and those looking to get around without the hassle of driving or worrying about having their bike stolen. There were sometimes as many as 500 of these shared, healthy, fun, and fast electric bikes to grab and go wherever you please in the City of Santa Cruz. Over the short but brilliant stay of JUMP bikes, over 680,000 trips were taken, covering 1.3 million miles in Santa Cruz in less than two years of operation. Does that sound like a lot of bike miles? Well, it is. That adds up to about one-third of a million pounds of greenhouse gas emissions reduced by replacing car trips (based on national surveys showing that approximately 29% of bike share trips replace car use). Plus, people got exercise and relatively affordable access to electric bikes—which cost $1,200 and more to buy. And yes, they sparked long and heated threads on NextDoor.

Over 50% of the City’s carbon footprint is from transportation. The JUMP bikes not only did a stellar job of reducing greenhouse gas emissions, they also got many locals hooked on riding e-bikes and transformed them into e-bike owners. This has been a boon for local bike shops and has also made local transportation more sustainable.

Ultimately, JUMP was a victim of corporate bottom-line thinking more than COVID concerns, as many bike-share programs continue to thrive in 2020 after an initial COVID pullback. For example, the Chicago Department of Transportation recently announced that August was the bike-share system’s largest ridership month ever with 612,928 rides taken, a 3.9% increase compared to last year. Chicago is the third-largest city in the country with a population of some 2.7 million, compared to Santa Cruz’s population of just over 64,000. Santa Cruz had its highest number of bike-share trips in July 2019, with 57,491 trips. Chicago recorded bike-share trips 10 times higher than Santa Cruz’s peak month, but Chicago has 42 times as many residents! Our little coastal town had a 90% per capita rate of bike share trips compared to Chicago’s rate of 27% for each city’s peak month.

Another indicator of strong bike-share utility is the average number of trips taken daily on each bike. The local JUMP service had an average of 4 trips taken daily per bike over the lifetime of the program. This number exceeds both large and small city bike-share averages, according to a report issued by the National Association of City Transportation Officials (NACTO). Their study stated, “Larger systems of more than 2,500 vehicles average around three trips per vehicle per day (TVD). Smaller systems, less than 2,500 vehicles, average .8 TVD.”

It is still early to know how well bike share is rebounding from the initial pandemic slowdown, but early data indicates strong ridership in some big cities as folks look for a safer alternative to public transit. Some are concerned with increasing their exposure to COVID by using a shared bike, but those concerns can be easily addressed by wearing gloves, wiping down points of contact, and washing your hands after each ride. The virus is mainly transmitted through the air from person-to-person close contact.

Uber, which purchased JUMP right before the Santa Cruz system launched in 2018, consolidated the company with Lime because bike share wasn’t profitable. Lime, which started as a bike share company, is now primarily an e-scooter company (e-scooters are more cost effective), with some e-bikes remaining in their fleet as well. The powers that be in Santa Cruz aren’t so keen on e-scooters for several reasons. The terrain is too steep on the UCSC campus (college students are a prime user group of bike/scooter share), and Live Oak has limited sidewalks, which create potential conflicts between pedestrians and scooter users. Also, there are concerns that parked e-scooters block pedestrian travel, questions regarding the life cycle and sustainability of scooters, and issues in relation to user safety and high crash rates. However, the North America Bikeshare Association’s Shared Micro-Mobility State of the Industry 2019 report shows that the total trip counts and replacement of car trips of scooter-share systems surpass bike-share numbers nationwide.

The trend for shared micro-mobility is toward e-scooters. In the greater Sacramento area, Lime bikes are back in operation, with about 250 bikes compared to some 700 e-scooters in the shared mobility system. Here in Santa Cruz, the path back to e-bike share will likely take another route, as the City of Santa Cruz is coordinating with other local cities and the County to bring back only e-bike share and to expand it to other urbanized areas of the county, including UCSC, Live Oak, Pleasure Point, and Capitola. The expansion could include Scotts Valley and Watsonville. 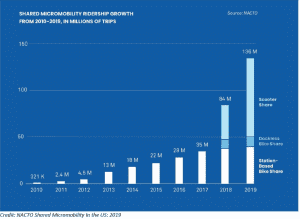 NACTO’S Snapshot annual report stated that, in 2019, people in the United States took 136 million trips on shared bikes, e-bikes, and scooters, 60% more than 2018… People took 40 million trips on station-based bike-share systems (pedal and e-bikes) and 96 million trips on dockless e-bikes (10 million trips) and scooters (86 million trips). In 2019, 109 cities had dockless scooter programs, a 45% increase from 2018. This contributed to a more than 100% increase in trips taken on scooters nationwide. Scooter expansion was in some cases unstable, with scooter companies exiting markets at the end of the year (prior to the pandemic), possibly due to over-competition and other market pressures. While bike-share ridership increased overall, driven by the largest systems, ridership declined in 75% of systems. (Source: NACTO, 2020. Shared Micromobility in the US: 2019. https://nacto.org/shared-micromobility-2019/)

Bike share and e-scooter share are in a state of flux due to the COVID pandemic, the consolidation of service providers, a trend toward more privately owned and run systems, and the perceived evaporation of venture capital.

When and what form e-bike share 2.0 will take in Santa Cruz County is hard to tell, as the merging of private business and public interest/public good is complicated, especially for a new and quickly evolving transportation technology. Some sustainable transportation advocates believe that cities and counties will need to partially fund e-bike share so that it can provide a reliable and consistent mobility option, just like how public transit, vehicle travel, and parking are subsidized. Bike-share companies are providing a public good: affordable, reliable, clean transportation. El Paso, Texas subsidizes bike share and contracts with a local company to operate the BCycle system, which is popular in small-to-medium-sized cities. BCycles is owned by Trek Bicycles, who provide bikes, software, and stations that are often operated by a local business or non-profit. This system allows for local control and workforce development. As the El Paso example shows, however, it needs to be subsidized like other forms of transportation to offer a reliable, affordable, and widely accessible service. This is especially true in small cities that do not have a high number of residents and visitors or the potential for corporate sponsors such as Citibank or Nike.

The JUMP bikes’ resounding success showed that e-bike share is a viable and popular mode of sustainable transportation for coastal Santa Cruz. Now, more than ever, we need that shared, physical distancing-compliant option when other forms of sustainable transportation are constrained due to COVID health concerns. Public funding could also allow e-bike share to be offered at reduced rates for essential workers and low-income users, integrated with public bus routes, and supplemented with user safety and etiquette education. Santa Cruz has an excellent opportunity to ride the bike boom wave with equitable e-bike share deployment.

Santa Cruz has made significant progress in making our local streets safer and more comfortable for biking, including the recently opened 1.3-mile Westside section of the Rail Trail, protected bike lanes on Water Street, green bike lanes, and a section of the Rail Trail to open in Watsonville in 2021. These bike infrastructure improvements would be complemented by a county-wide e-bike share program serving a wide variety of trips and people locally.