I’ve biked more than a thousand miles with my dog Mara, and I’ve picked up some lessons on how to do it well and have fun along the way. It turns out a lot of other people bike with their dogs too.

I grew up with a fluffy white lab named Fuchsia. We went on walks together, or out skating in the neighborhood, but anything further than a few blocks meant a trip in the car with my parents. It wasn’t until many years later, when I was living in Seabright and attending UCSC , that I first saw a dog in a bike trailer, and it changed by mind forever.

It was Nate Smith that I saw, with his dog Tucker. Nate was the sales manager at the Bicycle Trip, and he’d ride down my street occasionally on his commute. I thought it was the coolest thing – just a guy and his dog biking together. Tucker was an old dog when I met him, so the trailer let him and Nate travel together so he could hang out at the shop to greet customers—or, more often, lounge about and nap.

In 2015, when I got Mara, I was committed to keeping my bike lifestyle and adding Mara into the mix. So I picked up a Co-Pilot Model T, which I like for its clean design and high-visibility fabric. Mara was supposed to top out at fifty pounds, and the trailer was rated for a hundred, so we were in great shape. (Side note: I’ve never figured out how vets can make such accurate guesses, especially for mixed breed dogs, but they got it almost exactly right, and Mara ended up just under fifty pounds.)

There are a lot of ways to bike with dogs. People let their dogs run alongside them, or they carry them in baskets, backpacks, panniers, or trailers, or on cargo bikes. I’ve seen everything from a toy dog in a purse slung over the shoulder to labs and shepherds pushing a hundred pounds riding in trailers and cargo bins. 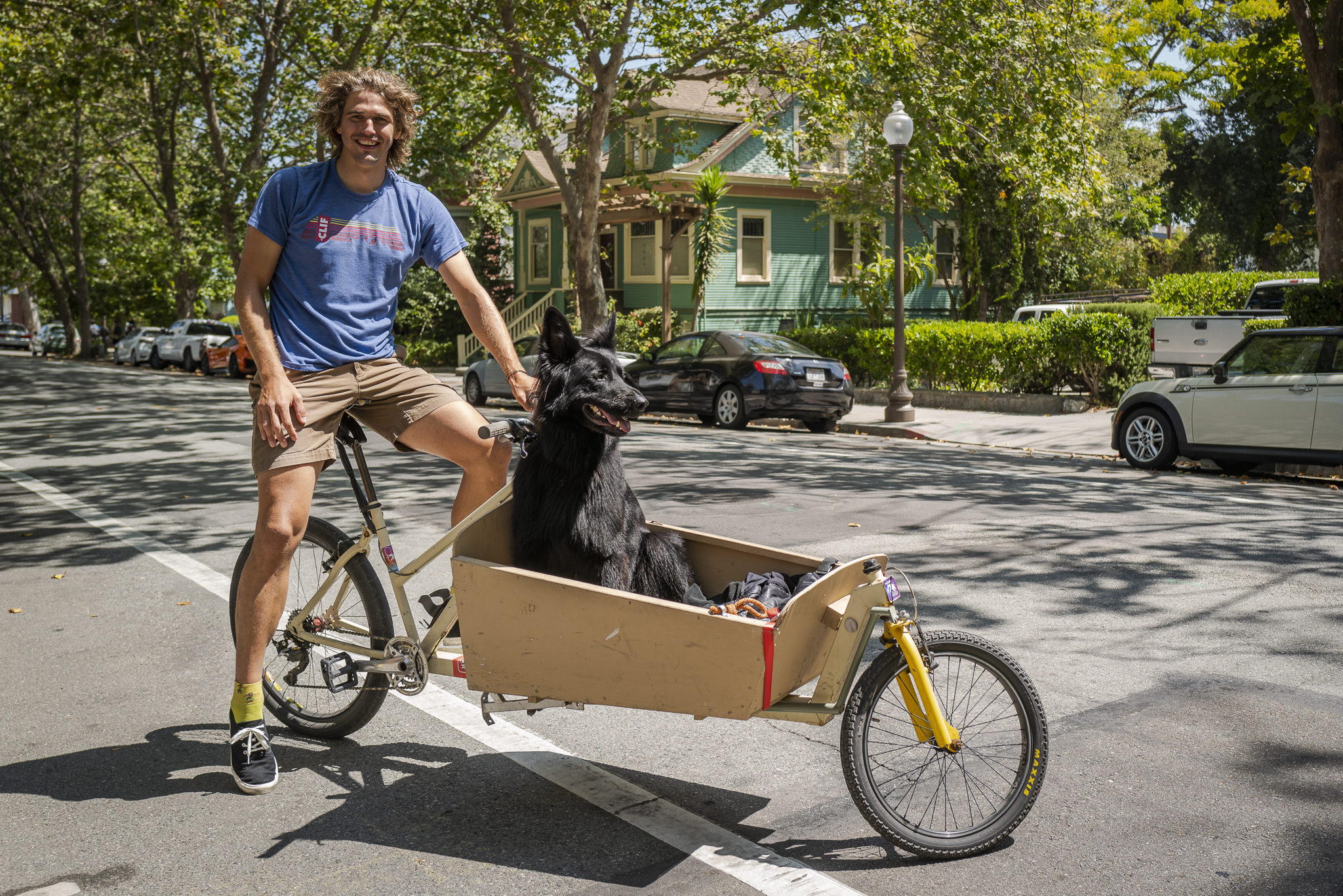 There are practical limits to biking with a dog, though. I didn’t seek out a Great Dane or an Irish Wolfhound because I didn’t have the space for one where I lived, I didn’t want to use trash bags to pick up their poop, and I wanted a dog I could carry by bike.

Why go to the trouble?

The reason I want to bike with my dog is an extension of why I want to bike in general. It’s fun! It’s an exploration and an adventure every time I pedal through town. With Mara, I get to share the sights and smells and sounds of the world, and we use commuting and other trips as opportunities for adventures, exercise, fresh air, and exploration. It’s a winning situation all around: I save money and get exercise, I provide my dog movement and fun, I don’t emit carbon dioxide, and parking is easy (though sometimes I have to get creative with the bike trailer). The reasons go on, but you get the idea.

Here is an outline to get you started with the dog + bike life.

1. Take it slow, and set low expectations. Not all dogs trust bikes. Mara didn’t want anything to do with the bike trailer for the first few tries, but positive reinforcement, high-value treats, and patience and persistence paid off! Now she hops in on her own and is completely unfazed when we ride. We’ve made hundreds of commutes and fun trips together since she was five months old.

2. Figure out how you’ll carry your dog. Does a trailer work? A cargo bike with a bucket in the front? A basket or pannier for a little dog? Think about what you’ll need to carry your dog and anything you’ll need to take with you. Be sure to assess the space and weight limitations for each scenario.

3. Be prepared. I carry a leash, poop bags, water, snacks, a stick or ball for mid-trip playtime, and a blanket or towel as appropriate along with my usual bike gear in the trailer when I head out with Mara. I tend to be more prepared nowadays.

4. Figure out your routes. Are you riding with kiddos, grandma, or new riders? Do you have previous cargo with you? Between seeking quieter, low-stress routes that are safer and have fewer, slower cars, and seeking scenic areas and open spaces to let your dog out for sniffing, running, and nature breaks, dog + bike routes require some extra planning and thinking. One benefit, though, is that I’ve found many cool pockets around Santa Cruz County that I might have missed otherwise.

5. Budget your time. Biking with a dog takes more time. Between picking a route, stopping for nature breaks, running into friends (human or dog), and everything else, trips usually run between 1.5 and 2 times as long. One significant game changer came, after three years of pedaling Mara around on my regular town bike, when I picked up an e-bike. Our average speed has increased since, without no extra exertion on my part.

Have you faced challenges along the way?

Yes. Mara and I have had three spills in our six years together. The first was by far the scariest for both of us. We were biking on the two-way track by the Boardwalk, headed toward Westcliff, when a guy coming quickly in the opposite direction veered toward us. I quickly leaned out of the way to keep from colliding with him, only to send the trailer’s outside wheel up against the lane barrier. The trailer flipped, Mara was thrown out, and it was several seconds before I could come to a complete stop. Mara was shaken but fine, and so was I, and the trailer had ripped in a couple of spots. The other cyclist didn’t stop. We collected ourselves, and from then on we moved much more cautiously.

The other trouble we’ve faced is bad weather. Rain, road grit, and low visibility make it tricky to pedal with a dog, and it can feel less safe. Luckily, Santa Cruz is sunny 72% of the time, which leaves a lot of fun, dry bike days with the doggo.

Does anyone else actually ride with their dog?

I wanted to get a little outside perspective, so here is my coworker Meggan and her big dog Murphy’s take on biking together. 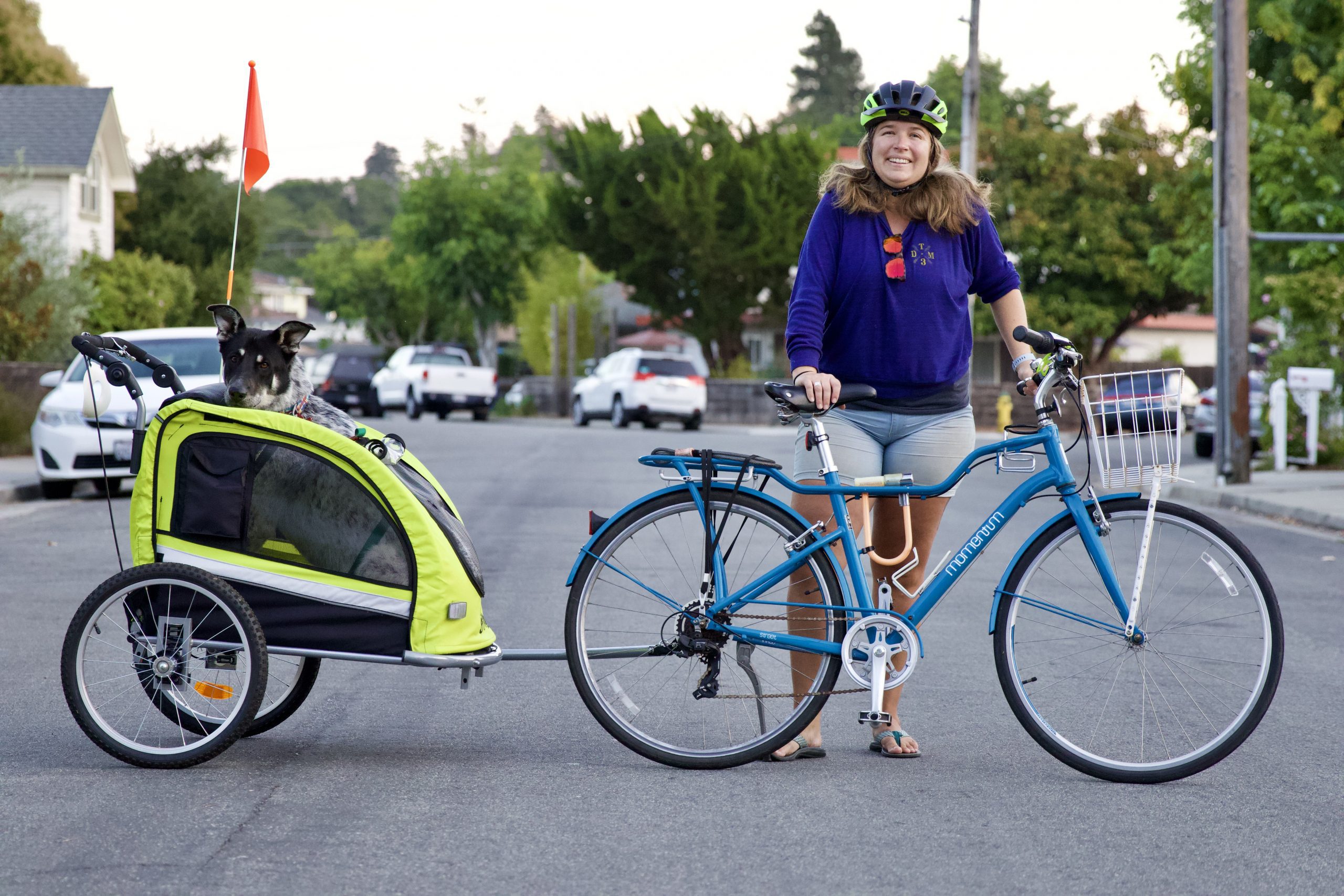 When did you start biking with your dog, how old was he?

I started biking with Murphy about four months ago, when he was only about eight months old.

Why did you decide to bike with your dog versus other means of getting around?

I decided it was a great option after he hurt his shoulder and couldn’t go out for normal walkabouts and beach sessions. The bike and trailer allowed us both to go outside and get some fresh air even when he couldn’t move as easily. He’s also only a year old and still growing, so running next to me as I bike or on the trails isn’t an option yet.

What are some typical trips you make with your dog and bike?

Most trips are just for fun— going to the beach or to Shanty Shack to grab a beer. Murphy loves the wind in his ears, and he has enough room to curl up and nap when he’s tired from his adventure.

What challenges have you faced biking with your dog?

What do you like about biking with your dog?

He genuinely seems to enjoy himself. He also gets a lot of attention from other bikers, walkers, and folks in cars. It makes me laugh, and I like to think it gives them the idea of doing this with their dogs too — regardless of size, because Murphy is massive. We also don’t have to sit in traffic — especially summertime traffic — to reach some of our favorite parts of town.

What lessons have you learned biking with your dog?

Biking with Murphy has turned into a great metaphor for life, to be honest. It’s taught me to slow down and really enjoy the ride instead of rushing to get somewhere. Murphy has so much fun just looking around and taking it all in that I find myself doing more of the same (safely, of course). He’s a fun biking buddy!

Do you have any recommendations for people who want to star biking with their dogs?

Take it slow, and bring lots of treats! Local bike shops will have all the details you need on bike trailers, if you want to go that route. Just be sure to go slow at first, and remember: it’s a new experience for your pup, and it could require some encouragement and reassurance. Always look for areas with as little traffic as possible to get your pup used to the new sounds of the road before commuting or going into more populated areas.

Don’t overthink it. Try it out, and take it slow. It’s an awesome adventure for both you and your pup, and it allows for some really cool ways to explore, both at home and on trips!

Ecology Action has a lot of dogs in our family, and we’re looking forward to getting them back together when we return to the office. See you in the bike lane soon, or at the dog beach!