I met with Jenny Kurzweil at 8:00 on a foggy Wednesday morning in early September. She arrived on a sleek coral-colored e-bike with matching fenders, wearing shorts and a unicorn t-shirt.  Jenny started working at the Community Foundation of Santa Cruz County in March of 2020, and she’d recently begun bike commuting from her house near Emiline Street to the foundation’s headquarters in Aptos.

I had asked Jenny if we could meet to talk about the fifty e-bikes that the Community Foundation had distributed to local non-profits in the fall of 2020, and we decided that her commute was the perfect chance to catch up and chat about the program. So we met at my house, zig-zagged our way through Seabright to the Arana Gulch Multiuse path, rode the length of Brommer Street to Jade Street Park, and then made our way through Capitola Village. We headed up the hill out of the village and hugged the cliffs along Park Avenue above New Brighton State Beach, heading toward McGregor Drive, and finally crossed over the freeway at State Park Drive. Along the way, we chatted about the foundation’s “great e-bike giveaway of 2020,” the many benefits of commuting by bike, and of course Jenny’s own sleek Faraday e-bike, which even on my own e-bike I was having a hard time keeping up with.

Jenny’s bike was on loan from the small fleet the Community Foundation kept for their staff to commute and travel to meetings. Since she started making the nine-mile commute three or four times a week, she’d noticed a number of benefits. “Working from home was no longer working for me,” she said. “I’ve been dealing with chronic pain issues, and I needed to start coming into the office. I feel better when I ride, plus you get to see people, check out dogs, and enjoy the views and quiet time along the way.” Jenny is no stranger to bike commuting, though. She rode to an office in downtown Santa Cruz for nineteen years before starting at the Community Foundation: “It was a no-brainer; a six-minute commute. This is the farthest I’ve commuted by bike by far, and I wouldn’t be doing it without the e-bike.” 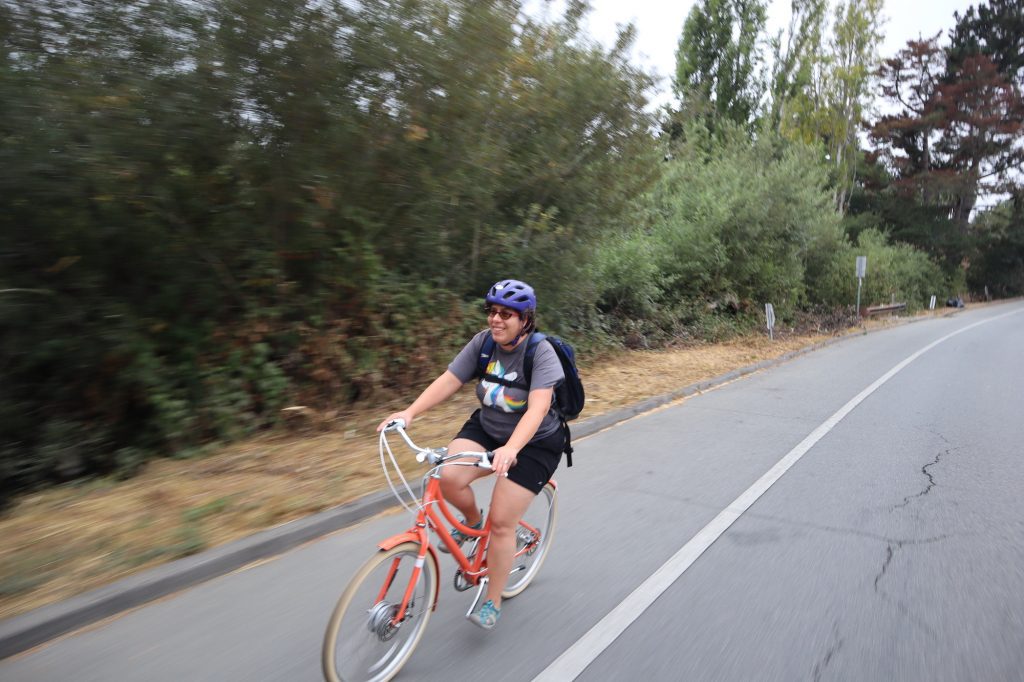 Faraday e-bikes have a distinct retro aesthetic, with clean lines and swept-back handlebars. “I feel like I’m in the 1950’s,” Jenny said at one point on our ride. “I should have a little basket for my tiny dog.” With few of the trappings of other e-bikes, there is little to announce that the Faraday bikes are even electric: there’s no LCD display, the batteries are hidden in the down tube, and the front-wheel-drive motor is only slightly larger than a standard hub. “As a non-tech-savvy person, they are great for me,” Jenny told me near the end of our ride.

Unfortunately, Faraday is no longer making e-bikes. But through the generous support of an anonymous donor and the help of Bell Helmets, the Community Foundation was tasked with distributing fifty Faradays to fifteen local nonprofits for use by staff and clients. I recently had the opportunity to speak with staff members at three of these organizations to find out how the bikes are being used around our community.

Stephanie Rios is the education programs coordinator at Watsonville Wetlands Watch (WWW), a dynamic nonprofit working on wetlands restoration and education. It’s housed at the top of the Pajaro Valley High School campus, with expansive views of the surrounding farmland and Watsonville’s amazing slough system. “The bikes are like eye candy to everybody. All of the youth want to know about them and try them out,” Stephanie told me. “During the summer, the youth used them to ride around the huge empty parking lot on our breaks. It was a lot of fun.”

Stephanie works with two teams of a dozen high school students for WWW’s Wetlands Stewards and Climate Corps Leadership Institute programs. “We have wetlands restoration sites that require transportation, and with one passenger van it has been a struggle to transport everyone. The two Faraday bikes have allowed us to make our transportation covid-safe, with two youth riding the e-bikes and four youth spaced out in the van. It’s even encouraged some of the other youth to ride their skateboards instead of getting a ride,” she says.

Stephanie says that though this is the first year that all 24 of the youths she works with have known how to ride bicycles, none of them currently owns a bike. “They have really sad stories about getting bikes stolen; taking it to the park and it not being there when they come back. For some of them, it’s the financial barriers, or they don’t have other people in their lives to ride bikes with.” One of Stephanie’s co-workers started an e-bike and bike safety training program for the teens: “It’s really fun when you teach them to turn on the bikes. There’s the excitement when the motor kicks in, but sometimes they forget, and they get that added exercise,” Stephanie shared with a grin. “Our staff have also been utilizing them to commute or to make a lunch run for the team. I used to spend a lot of time walking with supplies to some of our nearby restoration sites for our public programs and field trips, and now I can take the bike. They’ve been a great conversation starter for anyone who comes on our field trips. Many people ask ‘where’s your car?’ I get to say ‘I have a bike, and I can ride it around Watsonville without getting hit, plus I get some fresh air and mental clarity.’” Stephanie is eager to get more bikes for her programs. She would love to add a bike trailer or two, and she envisions her whole crew being able to ride together around Watsonville.

Laurie Egan is the programs director at the Coastal Watershed Council (CWC) and wears many hats at the organization. She supports community engagement, youth education programs, and the CWC’s water-quality and habitat enhancement efforts in their work advocating for and restoring the lower San Lorenzo River. “We’ve been working for years to bring community attention to the river, especially the five-mile Riverwalk pathway. With the e-bikes, I can now take people on a full loop of the Riverwalk in thirty minutes, as opposed to walking it in two hours,” Laurie says. “I did a tour recently where I was on my cruiser with two folks who’d never ridden e-bikes before, and they had no idea that the Riverwalk connected to the Tannery. The bikes have been wonderful to highlight the numerous special places along the river and how it all connects.”

The CWC also partners with communities adjacent to the river, and its staff have been able to transport supplies for restoration programs and educational programs without having to drive or deal with the very difficult parking in the area: “We’re an organization of cyclists, and this has definitely made us even more so!”

“This is like a hundred Christmases at once!” proclaimed a client of the Jesus Mary Joseph Home (JMJ), a recipient of  four Faraday e-bikes. Pat Gorman is the director of JMJ, a transitional shelter for women, children, and terminally ill people who are experiencing homelessness. Pat says that the bikes have been invaluable for helping their clients reach appointments and services and show up at jobs and interviews on time, and that they’ve been a great way for the families the home serves to bond. “For our clients, many of whom are low- to no-income, not having to pay for gas or parking is a huge plus, and being next to the West Side Rail Trail has meant that it is safe and easy for them to get to the grocery store or across town,” Pat related. “Being able to get to their jobs or appointments while not getting sweaty and still being presentable has made a huge difference. It’s also just nice for our moms to be able to ride bikes with the older children at JMJ—a free and incredibly fun family activity.” According to Pat, biking has become a great outlet for her clients, especially during the pandemic. “It’s healthy, open-air, and socially distanced, especially with the amazing path in our backyard.”

We’ve known for a long time that bicycles can open many doors for people. They’re good for letting people connect with their bodies, with the outdoors, and with their communities. But there are still some constraints on what people and organizations can accomplish with regular bikes. What we’re learning from the great e-bike giveaway of 2020 is that e-bikes have the power to bring even more of cycling’s utility and other benefits to non-cyclists, regular riders, and seasoned pros alike. Access to e-bikes re-ignites people’s interest in cycling, expands their bikeable range, and helps them incorporate riding into their commutes, work, and personal errands. It also provides free or low-cost access to social services, natural spaces, and other resources. Plus, these bikes are just fun. They invariably spark joy in everyone who tries them. One Faraday rider in her early 60s declared, “I feel like I’m 12 years old again!” Keep an eye out for sleek Faraday bikes around town; they could be one of these fifty!

The Racial Inequities of Climate Change

It has been an exciting time for active transportation on the westside of Santa Cruz. Our…